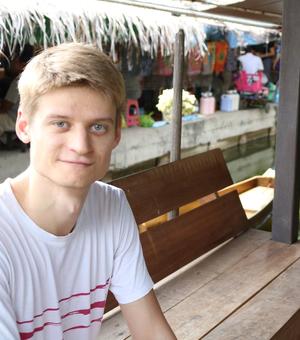 I am a DPhil student of History. I completed an MSc in Modern Japanese Studies at the Nissan Institute in 2017. I focused on Japanese Intellectual History, and wrote my dissertation on the making of an alternative religion in late-Meiji Japan.

After the MSc I spent three years teaching at two leading universities in Thailand. From this experience I became interested in the little-known transnational links between Japan and Thailand in the late 19th century. Thailand (or Siam at this time), like Japan was never colonised, and there are surprisingly few studies of Japan and Southeast Asia outside the schema of imperial aggression and colonisation. My examination of various nonstate actors from Japan, Thailand and beyond is part of a move to reorient the history of Japan and Southeast Asia away from empire, and towards the crucial attempts of transnational solidarity and cooperation of the time.

At Thammasat University I was a lecturer in Thai Studies at the Pridi Banomyong International College. I mainly taught courses relating to philosophy and religion, as well as research methods and academic writing.  At Mahidol University International College (Humanities and Language Division) I taught Asian Philosophy, Buddhism and the Public Sphere, and Technology, Philosophy and Human Kind.

A re-working of my undergraduate dissertation with Dr Peter Matanle at the University of Sheffield culminated in the publication of the following article, and subsequent discussion paper. This was featured in the UN office for Disaster Risk Reduction (UNDDR) newsletter.