Dr. Giulio Pugliese is the new departmental lecturer in Japanese Politics at the Nissan Institute of Japanese Studies at the Oxford School of Global and Area Studies. He specialises in the international politics and, to a lesser extent, economics of the Asia-Pacific with a focus on Japan, China and the United States.

In the past two years he authored a wide-range of academic and policy-oriented publications. On the academic front, publications included an original contribution and leading editorial role for a special issue on the Abe administration’s diplomatic and security practice (The Australian Journal of International Affairs), a co-authored article on the Japan-China struggle for spheres of influence in the Indo-Pacific (The Pacific Review), as well as an analysis on the crystallization of US-China enmity (The Asia-Pacific Journal). On the policy front, Pugliese has written an analysis on Italy-China relations before and after the pandemic (East Asian Policy) and two original contributions on the history and evolution of the Quadrilateral Security Dialogue, as well as on the genealogy of the Indo-Pacific concept for the Italian Parliament. 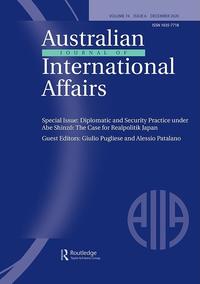